What follows are my observations from nearly a decade of hard fight training in Core JKD as a female.

Now, the bad-ass part of me wants this guide to be essentially gender neutral. That bad-ass would pretend women are just smaller versions of men, and I would address issues of fighting and technique.

But let’s face it; we are not the same.

We live in a society with different expectations for female bodies—especially when it comes to appearance.

These are my experiences with cauliflower ear, broken teeth, clothing that hindered training, insecurities regarding my body, and false perceptions about what I do and why I do it.

I want to help you avoid some of that pain, worry, and misunderstanding.

There seem to be some typical gender roles people can fall into during fight training. Sometimes these happen without our knowing or when we think we are being courteous to our training parters. Try to recognize them in yourself and others, and get rid of them. You will train yourself AND your partners much more effectively.

One guy keeps trying to out-muscle the other guy; then the other guy ups the muscle on the original guy; the situation keeps escalating until they are both exhausted.

While this can be fun and it can be good to test yourself this way, most times, I see very little technique happening in this situation.

Nobody is getting better in their skills.

Relax, step back, and remember that you have leverage and momentum tools too.

They’ll keep you in the fight much longer than muscle can.

Many men have been taught from a very early age that it’s wrong to hit a woman.

While that’s certainly admirable in everyday life, in the training environment, this mentality is doing your female training partners a huge disservice.

They are there to learn how to defend themselves realistically.

In order to do that, they need to be realistically attacked during training.

She may be smaller, but in a real fight, she’ll probably be smaller than her attacker too.

Better she learns to deal with that problem in training than in a real situation.

Now, you can certainly get feedback from your partner and have her tell you “more” or “less” power (we all have to start somewhere), but please don’t feel bad about giving her a mechanically realistic attack.

You are helping her get better. 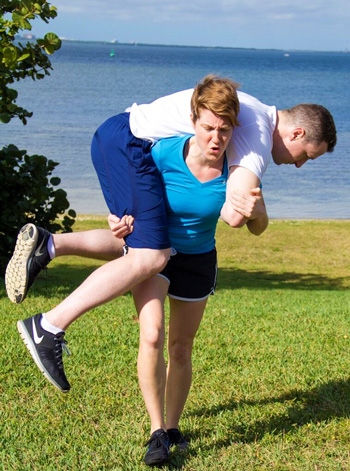 Many of us are smaller than the men we train against.

A lot of times we forget this and start trying to match muscle with them. It’s a losing battle.

Or we mentally fall into a trap of thinking: I’m smaller and weaker, this can’t possibly work.

Being smaller doesn’t have to be a disadvantage.

You have tools they don’t, like speed, agility, and tiny arms that seal a choke ohhhhh so tightly.

Use leverage, and capitalize on their momentum. Don’t be afraid to train against big guys. You won’t have a choice on the size of your attacker in the street.

Testing a technique against a big guy in training will show you immediately what you need to fix to make it work.

We don’t have the luxury of adding a little touch of muscle at the end of a technique to fudge it like some guys do.

It feels like we have to train 3x harder than they do lots of times.

But when you nail the mechanics of a technique, you will be 3x the better fighter.

...if I’m hard on another female, she might think I’m being mean to her.

We’re often unaware that we’re stuck in a mindset where, if I’m hard on another female, she might think I’m being mean to her.

We just aren’t used to interacting with each other physically, and so we have no common “social language” when it comes to the physical realm.

Most boys rough-housed with other boys growing up, and they have long-ago established boundaries when it comes to physical interaction. I was a tomboy, and even I have no memory of rough-housing with other girls in childhood.

Today, as an adult, I often find myself going softer on another woman just in fear of being misinterpreted if I go harder.

I see other women falling into the same pattern. Or other times, just like the men, I think maybe my partner can’t take it if I’m hard on her.

Train each other hard, with realistic mechanics, and you’ll both grow in skill faster.

Know that in the studio, we all have high respect for each other.