I’ve had nearly 30,000 hours of training, research, and development to help shape Core JKD into what it is today.

Core Jeet Kune Do is one of the most advanced self-defense systems for training individuals to survive life-threatening encounters versus resisting single or multiple attackers, with or without weapons in a variety of environments.

It is an experiential combative art. You must immerse yourself in the physical and mental experiences to discover its truth. You just can't sit by on the bleachers taking notes and hope to understand what it means to be functional in Core JKD. 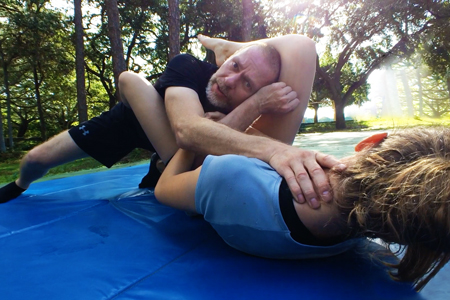 There is a need for Core JKD 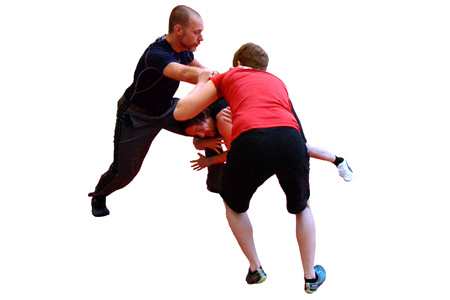 Many of you are seeking something beyond what traditional training can offer. You may even have seen people who dedicated a great portion of their lives to training that didn't actually help much when they got into a hand-to-hand encounter or a life-threatening situation.

I have trained people who've come directly from those types of situations—some have had double black belts in systems that have more to do with training ego than functionality.

The Core JKD Method is an umbrella term defining personal practice, immersion, involvement in our community, teaching, testing, and growth in any of the following or combination of the following curricula: Core JKD, Rebel Wing Chun, CJKD Weapons.

Core JKD is the general and all-encompassing set of techniques, teaching methods, and proprietary applications in all the ranges against resisting opponents that will include Rebel Wing Chun and CJKD Weapons at different levels in the curriculum.

Rebel Wing Chun and CJKD Weapons are pathways for proficiency in only those ranges and methods particular to them. Some people wish only expertise in these areas, and we offer them as pathways for testing and certification as well.

A general guideline of how I train you:

A necessary part of our training also includes a specific type of CJKD meditation that heightens our perceptual skills, controls emotional reaction during stress, and increases our ability to focus and drive toward a specific goal.

Minimal Breakdown of the Human Being Base is your dynamic platform from which to stabilize against resistance from single and multiple attackers.

It puts us in the right place at the right time for support of upper and lower body attacks and evasions—standing or on the ground.

The following is an excerpt from The Manual of Core JKD, which is in development for publication.

We have sets of muscles that contract our limbs and cause them to move within a specific range of motion. We contract them at specific speeds and with a specific amount of contractile strength. Aside from some variations in our gene pool, we generally move in the same way with the number of limbs we have. Until we come across a 6-limbed person, this generality is a stable example tested over the time of our genetic history.

Unique to the individual is how far we can stretch our muscles - this can allow for a greater range of motion than the average person. Also, different people have different rates of contraction of the muscle and different recovery times from heavy exertion.

Generally, we also have the same internal mechanisms for determining our balance, reading our visual field, listening to and smelling our environment.

Our physical bodies can be trained to react quicker, have better balance, to be able to last longer in a strenuous situation.

We also have a mind that can be trained to push through hardships we never thought we could.

Core JKD is about getting the body and mind processing our environment at its optimum levels to succeed against opponents who are a threat to our survival.

When confronted by an attacker—or multiple attackers—who wish to harm or kill us, our options have to be pared down to the minimum required to keep us alive.

That means that a lot of the fancy or flashy moves you might see in other martial arts—techniques kept in a system because the founder of the art determined they were required at the time of its development—may have no basis or function in the Core JKD environment.

This doesn’t mean that some of our methods or techniques won’t look flashy—some might—but there is a deeper level of understanding as to why those movements are taught. For example, the Core JKD Hatchet kick can look flashy, but it is actually a very focused, pinpoint kick that applies a lot of force through a small surface area. It can be highly effective for the practitioner who uses it.

Not everyone is able to use it for reasons of injury, flexibility, balance, etc. For those students, it isn’t forced upon them.

Core JKD does this well because of that directive.

Find out more about becoming a Certified Group Leader and Instructor in the Core JKD System here. (Or simply go to CoreJKD.info)