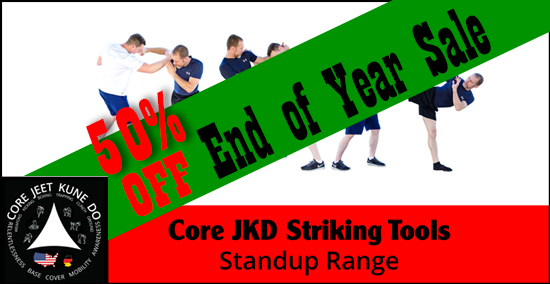 Take Me To The Video!

For Beginner, Intermediate, and Advanced Individuals

All in crisp HD Video

Every Striking Tool Technique In One Place.

Have you always wanted to know just how to use that Inverted Hook Kick?

Or maybe you want to know what the heck that Core JKD Corkscrew kick or Corkscrew Punch is all about?

Maybe you just want to have one of the best, complete striking tools videos to make sure all your techniques are as efficient as they can be.

If you've seen our Core JKD YouTube channel, you know the quality of instruction and thoroughness you'll get with these videos.

Add to the fact that all of the tools trained are refined to allow for better combinations with every other tool at your disposal.

Core JKD is built on the foundation of survivability in real world situations - these videos are a part of that refinement.

The best part of any system is that it can take into account everything the student or instructor brings with him or her.

If you aren't one to use kicks much because of inflexibility or injury, then you need kicks that work for you when it counts - without tearing off your hamstrings in the process.

This video has those kicks—from the coup de pied bas to the Wing Chun knee stomps or Stinger.

Ever use a headbutt in fighting? How about in training for a fight.

We're not talking about theory here.

You'll also get training in how to use the shoulder as an accurate knockout tool. Yes, your shoulder.

We have elbows galore! EFFECTIVE elbows!

Have you seen the Sneak Elbow?

There’s a reason for that: Only Core JKD has them.

This devastating elbow is also one that your opponent won’t see.

It’s so effective, you have to train it with great care so you don’t injure your training partner.

It’s that hard to see—and even harder to defend.

Eliminate the errors that will help you go to the next level in your training and fighting.

This is no small thing.

I've successfully trained people for nearly 25 years to refine their skills to high levels of functionality.

My clients have included all branches of the military and law enforcement and people with decades of training in other arts and systems.

I train the individual.

I raise everything you bring to me to higher levels of functionality—for surviving life and death situations.

- Against single and multiple opponents, with and without weapons.

- Regardless of your gender, size, or skill level.

I make you functional, efficient, effective.

I have trained people who needed the skills to stay alive in the heat of hand-to-hand combat.

I have trained the average person just needing to get home safely from a late night run to the grocery store.

My years developing Core JKD created the most functional, efficient, self-defense system for the individual.

I don’t make you conform to Core JKD, I make Core JKD conform to you.

Check out our testimonials on our main homepage for more information about me and my effectiveness at teaching.

What's in the videos?

Effective training that gets to the heart of the information as early as possible.

Your time is valuable, so is mine. I don't waste screen time talking about what I'm going to show you—I just get right in and show you.

The Core JKD Standard reference videos are a virtual encyclopedia for the following range tools: Kicking, Boxing, and Clinch.

Each video details the specific tool mechanics for their range and how to use them efficiently.

Take Me To The Video!