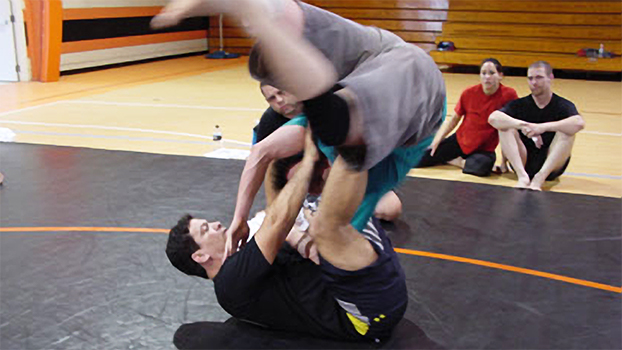 [Caption: Rigan Machado gives my student a spin during a break in our training]

I recently had a question posed to me where the person wasn’t sure they really wanted to train extensively on the ground, specifically the “rolling” that is often seen. They also wanted to know if Ground was required for certification in Core JKD.

In Core JKD you can choose to test and certify in the following:

Separately, as in proficiency in one or any combination of the following:

You may also choose to test and certify in Rebel Wing Chun.

So, no, you don’t have to choose Ground if that isn’t your forte or preference. However, the training you see for Ground is not about rolling with someone and having that be the means by which you survive a life-threatening situation. The extensive “rolling” training does a few things for you:

Omitting the deeper involvement with Ground, though, is akin to riding a bike and only training in a straight line on a level road. As soon as you want to turn or go up or down a hill, your chances of falling increase tremendously. And forget it if the road has potholes or other obstacles in the way.

It’s also the same for those who believe that ground fighting is the only thing that’s important. Those people also fail greatly when coming against an average or good striker or someone well-trained in weapons.

Overall, the priorities for Core JKD Ground training are to work toward top dominant position and control where the increased mobility allows for full use of all your attacking tools or ability to escape, should that be needed.

In our Ground training the extensive “rolling” is so that we gain a clear understanding of our own bodies and our ability to manipulate them under skilled, strong, and/or heavier attackers—as well as in corners, against walls, or on different surfaces, etc. It is great exercise with lower chances of injury, so that you can train at any age. Where the rubber meets the road with Core JKD, it’s all about quickly extricating oneself to top dominant control under heavy resistance with striking or weapons use.

There are also those who believe that being able to time and execute a great sprawl will save them from people who desire you to be a grounded victim so they can “work you over” with their years of skill.

Were it only that easy.

In truth, there are things like full body tackles that no amount of sprawling will have any success against, as the attack isn’t necessarily intended for a shoot takedown but, rather, the clinch bind so takedowns can occur from there.

Body tackles can come to gut, chest, or head elevations and can overwhelm people not trained for it. Once the tackle is secured, then off-basing or takedowns are much easier. This is why clinch training is so vital. As is Ground.

Sprawls also don’t take into account other takedown pathways, like clinch-binding to throws, tripping and sweeps, as well as wrist, arm or head manipulations to off-base.

This is to point out that that there are many ways to get someone down into a weak, grounded position that then requires a lot of physical and mental conditioning and previously trained skills to counter.

So, while you don’t have to certify in Ground for Core JKD, it will most definitely benefit you to train the ground aspects extensively so that you aren’t a victim of your lack of involvement.

As many of us with a lot of experience know: what you don’t train will end up biting you in the ass in a fight.

I hope this helps.